What is Absentee Bidding

Absentee bidding is a way that you can place bids and participate in auctions without the need to stay and watch until the end. Your bid is considered to be your maximum bid, so you'll win the auction if nobody bids higher than you. Most of the Mandarake Everyday Auctions use an absentee bidding system.

If you have never participated in an online auction before, please also read our guide to Bidding in Online Auctions. Both of this guide and this help page will explain how auctions work and how outcomes are determined (including why you may still not win an auction even though the amount you bid is the same as the winning bid amount).

Starting Price = the first bid in a new auction. This amount is already decided and shown on the auction screen.
Current Price = the price by which the auctioned item will currently be sold.
Bid Increments = the lowest amount by which a new bid must exceed the Current Price.
Maximum Bid = the highest amount you are willing to pay for an item.
Minimum Bid = the lowest amount you are able to bid (Starting Price if there are currently no bids, otherwise Current Price + Bid Increment).
Bid Area = the box where you enter your new bids.
Bidding Status = your current standing in the auction.
Sold For = the Current Price + domestic consumption tax (may not be shown for international customers as this tax is not added).

How to Bid - An Item With No Bids 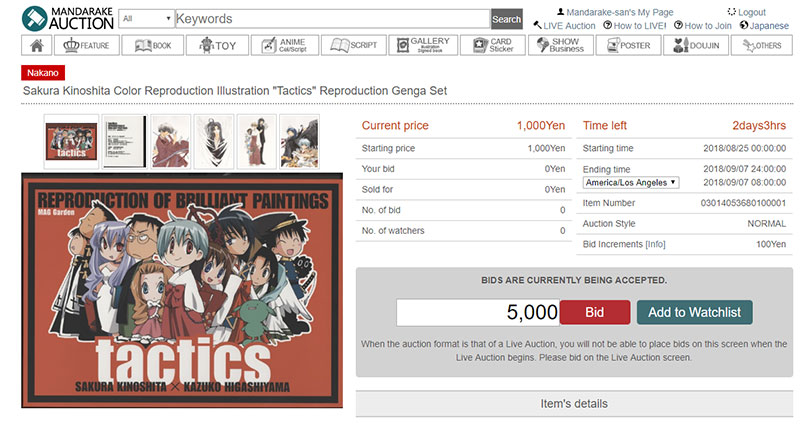 A pop up window will confirm that this is the amount you wish to bid. 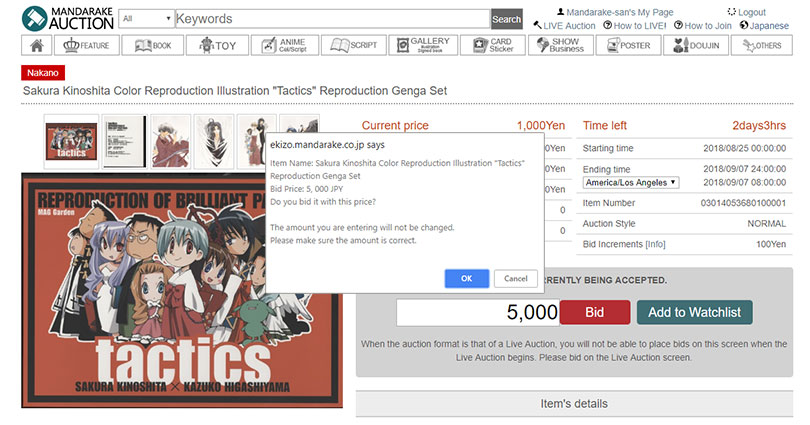 Congratulations, you're winning the auction! If nobody places a higher Maximum Bid than you, you'll win the auction and only pay the Starting Price. 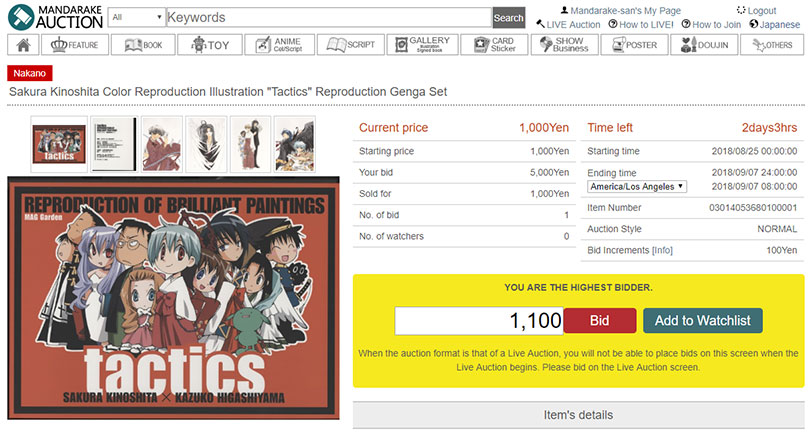 If you would like to increase your Maximum Bid, simply enter the new amount in the Bid Area and click 'Bid'. A pop up window will confirm that this is the amount you wish to bid. 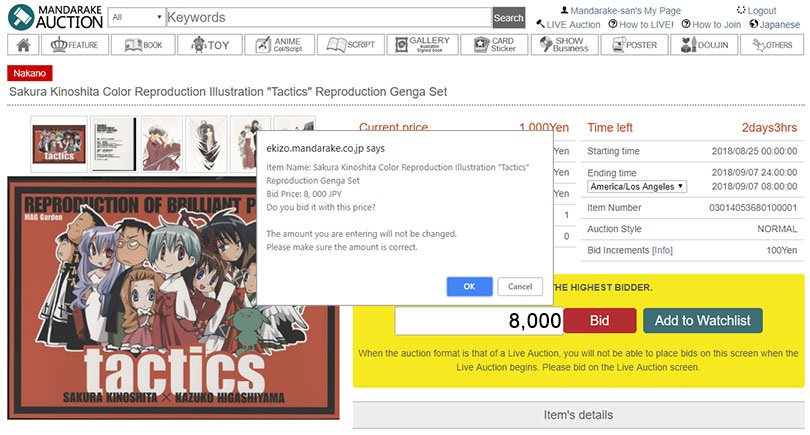 You have now increased your Maximum Bid. 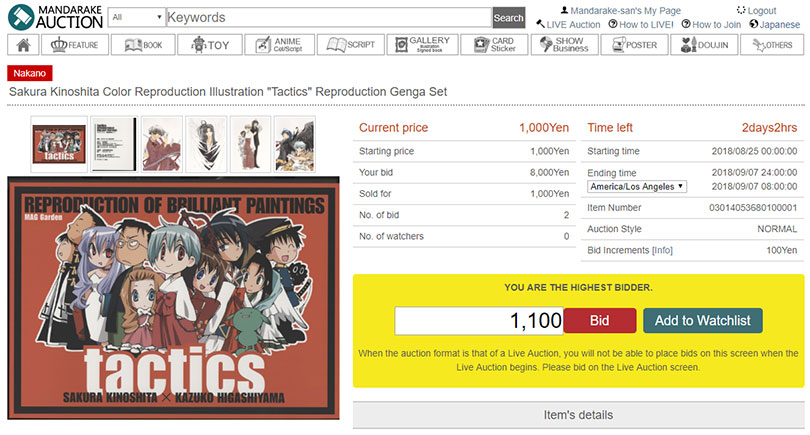 How to Bid - An Item With Other Bids

When making a bid on an auction that already has other bidders, you're not guaranteed to take the lead. We cannot see what the current highest bidder's Maximum Bid is, only the Current Price and the Minimum Bid. 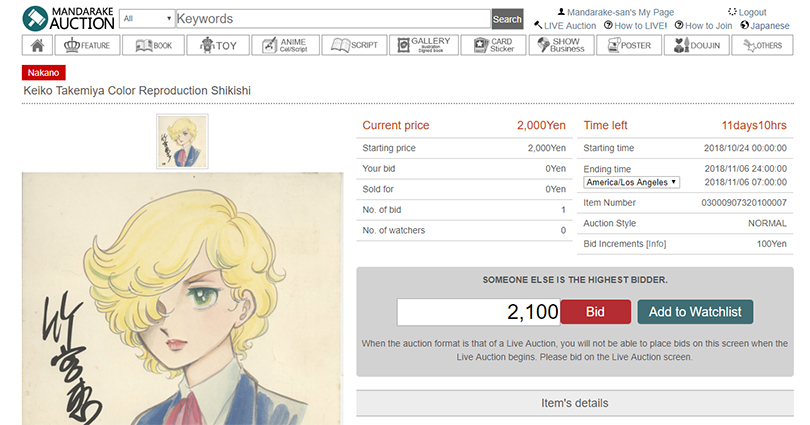 Enter your Maximum Bid in the Bid Area and click 'Bid' to place a bid. 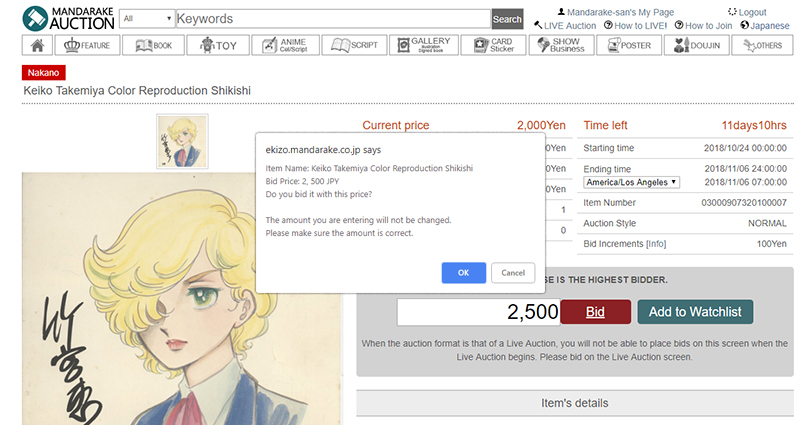 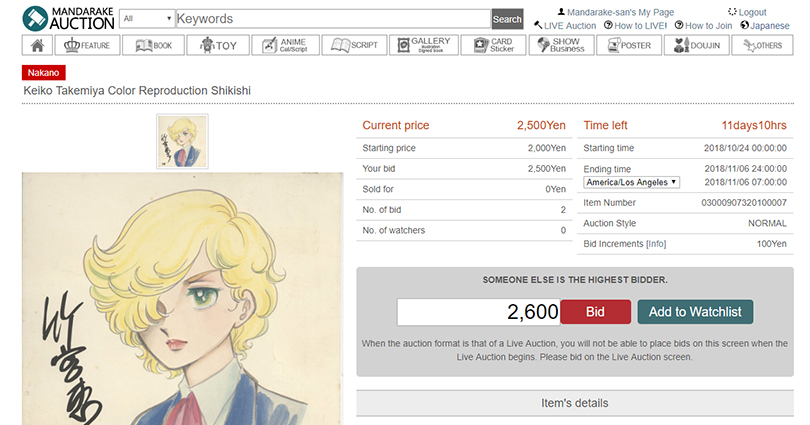 If you want to place another bid, repeat the steps above. You will know when you are the winning bidder because the screen will turn yellow. 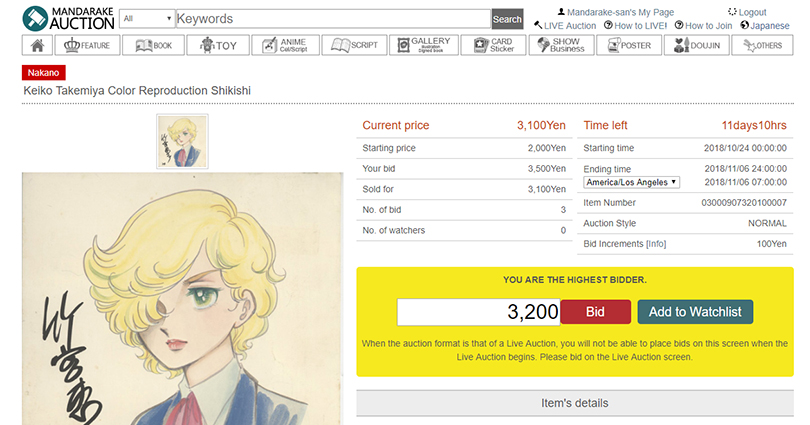 * Your Maximum Bid will not be visible to other bidders.

* If a bid is placed within the last 5 minutes of the auction, the auction time will be extended by 5 minutes (up to a maximum of 2 hours).

* If multiple bidders offer the same Maximum Bid, the first person to make that bid will be the highest bidder.

* If you raise your Maximum Bid and the Current Price increases but you are still not the highest bidder, it means that someone else either set their Maximum Bid higher than yours or they have the same Maximum Bid but placed the bid first.

* ALWAYS refer to your Bidding Status to know if "You are the highest bidder" or if "You have been outbid".

Example 6 - "I can see my current status on My Page. I am winning two auctions, but I am not winning one auction." 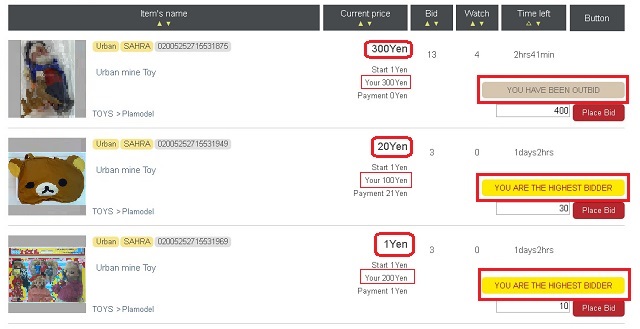 Example 7 - "I cannot bid on any auctions because I have not yet completed the authorization process."

Return to the Store